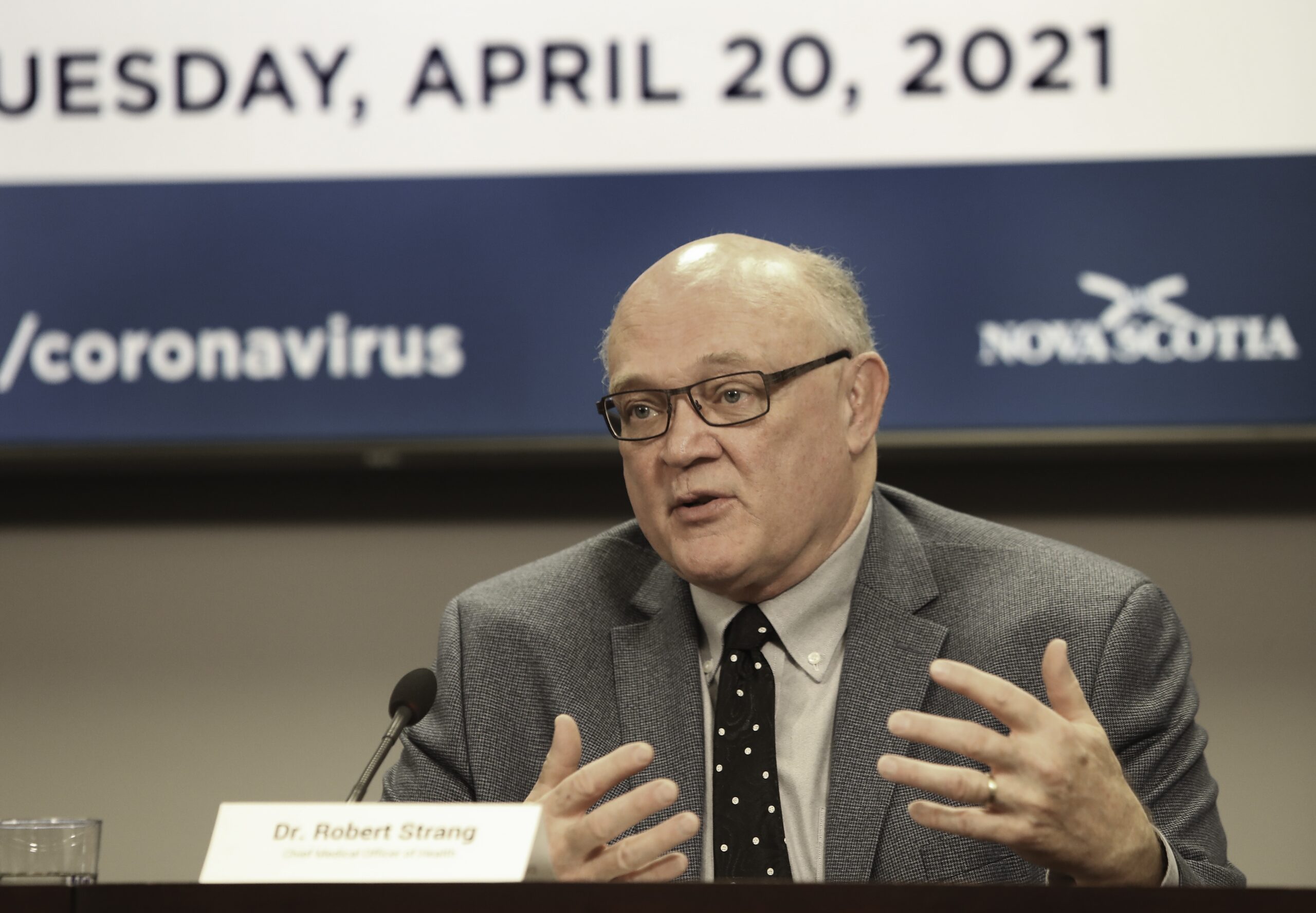 Responding to rising case numbers reflecting an increase in travellers with COVID-19, Nova Scotia is banning all non-essential travel into and out of the province, effective 8am Thursday. People arriving from PEI and Newfoundland and Labrador are exempted from the ban.

Essential travel is defined as:

The ban is in place until May 20, but could be extended.

“We are also going to be allowing fewer compassionate exceptions during this four week period,” said Chief Medical Officer of Health Dr. Robert Strang at today’s COVID briefing. “This means that people will not be allowed to travel to Nova Scotia from outside Atlantic Canada for funerals and only in exceptional circumstances for end of life visits.”

As well, rules on rotational workers are being tightened. “For the next four weeks, rotational workers will have to fully isolate from their family members,” said Strang. “That can be done under the appropriate protocol in the same home, but they have to fully isolate until they get their first test results back, and that test result is negative. After they have received that negative test result, they can follow the modified isolation protocol that allows them to interact with their family and be in outdoor places in the community and go to medical appointments. But that’s only after they’ve received the negative result from their first test.“

Strang to Ontarians: Frig off!

Strang said that recently there has been a 400% increase in people coming into Nova Scotia via the land border (i.e, on the Trans-Canada Highway).

“The border folks are seeing a significant increase that in the last short period of time of many, many more people coming from Ontario especially — they’re identifying as from Ontario,” explained Strang.

“We don’t have reasons why. But if you look around, we know that Nova Scotia has been seen as a place where it’s safer. Our real estate industry is benefiting from that — people coming to move here to live here. But I’m not going to speculate on why people are coming; there are many reasons, probably, for leaving Ontario. But what we do know is that there’s been a significant increase in volume and because they’re coming from areas of high of high rates of COVID, they’re a significant risk of bringing COVID into Nova Scotia. So we have to we have to stop that and only allow people that it’s essential for them to travel at this point in time.”

The new orders prohibit anyone from Ontario moving to Nova Scotia unless they already own a house here.

“So that means that if you purchased the place before April 21st, you can come here,” said Strang. “But we’re telling people that now is not the time to be looking to purchase something in Nova Scotia for the next four weeks and anticipate you can move here. You have to have purchased your new permanent residence in Nova Scotia before April 21st.”

I asked Strang if the same rules apply to, say, someone who got a job in Nova Scotia and is moving here hoping to lease an apartment.

“Well, I think this is a four week period,” he replied. “We have to work out some of the details. With all of the things we put in place, there is the capacity for people to make an appeal. But in general, what we’re saying that we need to slow down the flow of people that are coming here.“

Strang said there are several COVID clusters in HRM — in Sackville, Halifax, Dartmouth, and Lawrencetown.

“One of our current clusters was the result of family and friends gathering with people who had recently come from Ontario,” said Strang.

I also asked Strang if the ban on non-essential travel means that the International Women’s Hockey tournament scheduled for Halifax will be cancelled. He replied:

So I work closely with that. They have a very strict protocol. And essentially, if they come here, they will be in a bubble that they will have no interaction with Nova Scotians because they have very clear protocols about individuals and teams and even the whole tournament. Once they’re out of their quarantine, they will still be not interacting with Nova Scotians. So that tournament does not, in my opinion, does not present a risk of transmitting or bringing COVID and then transmitting it into Nova Scotia, with all the very strict protocols they have even before they leave their home countries.

Six of the cases are in Nova Scotia Health’s Central Zone — five are close contacts of previously announced cases and one is under investiation.

The is also one case in the Eastern Zone and two in the Western Zone, all related to travel outside Atlantic Canada.

There are now 68 known active cases in the province. Two people are in hospital with the disease, but not in ICU.

The active cases are distributed as follows:

Four cases are not assigned to a Community Health Network, but they are in the Central Zone.

Pop-up testing for asymptomatic people over 16 (results usually within 20 minutes) has been scheduled for the following sites:

Public Health Mobile Units are available for drop-in and pre-booked appointments (symptomatic people must pre-book) for PCR tests for people of all ages (results within three days) at the following sites:

But you can also get tested at the Nova Scotia Health labs by going here.

As of end of day yesterday, 216,018 doses of vaccine have been administered. I suspect that the Dept. of Health is incorrectly calculating percentage of the population that has been inoculated; I’ve asked for clarification, and I’ll wait for that until I post those figures.

Here are the new daily cases and seven-day rolling average (today at 7.1) since the start of the second wave (Oct. 1):

And here is the active caseload for the second wave:

Anyone who was on the following flights in the specified rows and seats should visit https://covid-self-assessment.novascotia.ca/en to book a COVID-19 test, regardless of whether or not they have COVID-19 symptoms. You can also call 811 if you don’t have online access or if you have other symptoms that concern you.

Some people have asked that we additionally allow for one-time donations from readers, so we’ve created that opportunity, via the PayPal button below. We also accept e-transfers, cheques, and donations with your credit card; please contact iris “at” halifaxexaminer “dot” ca for details.

7 Travel Podcasts to Inspire Your Wanderlust

Jamaica to Ban Travel from Trinidad and Tobago

United States adds 116 countries to ‘Do Not Travel’ advisory

5 new cases of COVID-19 announced in Nova Scotia on Thursday, April 8; all 5 are related to travel