Brussels is to propose a personal electronic coronavirus vaccination certificate in an effort to boost travel around the EU once the bloc’s sluggish immunisation drive gathers pace.

Ursula von der Leyen, European Commission president, said on Monday the planned “Digital Green Pass” would provide proof of inoculation, test results of those not yet jabbed, and information on the holder’s recovery if they had previously had the disease.

“The Digital Green Pass should facilitate Europeans‘ lives,” von der Leyen wrote in a tweet on Monday. “The aim is to gradually enable them to move safely in the European Union or abroad — for work or tourism.”

The plan, expected to be outlined this month, is a response to a push by Greece and some other EU member states to introduce EU “vaccination passports” to help revive the region’s devastated travel industry and wider economy.

But the commission’s proposed measures will be closely scrutinised over concerns including privacy, the chance that even inoculated people can spread Covid-19, and possible discrimination against those who have not had the opportunity to be immunised.

It will not work . . . at EU level because it is too complicated and would not be in place by June

In an immediate sign of potential opposition, Sophie Wilmès, Belgium’s foreign minister, raised concerns about the plan. She said that while the idea of a standardised European digital document to gather the details outlined by von der Leyen was a good one, the decision to style it a “pass” was “confusing”.

“For Belgium, there is no question of linking vaccination to the freedom of movement around Europe,” Wilmès wrote in a tweet. “Respect for the principle of non-discrimination is more fundamental than ever since vaccination is not compulsory and access to the vaccine is not yet generalised.”

The travel sector tentatively welcomed the news of Europe-wide vaccine certification as a way to rebuild confidence ahead of the crucial summer season, but warned that regular and rapid testing was a more efficient and immediate way to allow the industry to restart. 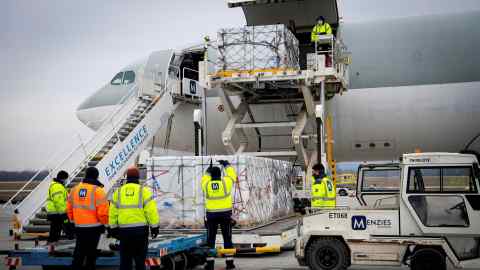 Marco Corradino, chief executive of online travel agent Lastminute.com, said he feared the infrastructure needed would not be ready in time for the summer season: “It will not work . . . at EU level because it is too complicated and would not be in place by June.”

He suggested that bilateral deals, such as the one agreed between Greece and Israel in February to allow vaccinated citizens to travel without the need to show a negative test result, had more potential.

Vaccine passport sceptics argue it would be unfair to restrict people’s travel rights simply because they are still waiting for their turn to be jabbed.

Gloria Guevara, CEO of the World Travel and Tourism Council, said it was important not to discriminate against less advanced countries and younger travellers, or those who simply cannot or choose not to be vaccinated. “Future travel is about a combination of measures such as comprehensive testing, mask-wearing, enhanced health and hygiene protocols as well as digital passes for specific journeys,” she added.

A European Commission target to vaccinate 70 per cent of the bloc’s 446m residents by September means many people are likely to go through summer unimmunised.

While some countries around the world have long required visitors to be vaccinated against infectious diseases such as yellow fever, a crucial difference with coronavirus is that those inoculations are available to travellers on demand.

Questions also remain about the risk of people who have already been vaccinated passing on coronavirus if they contract the disease.

Despite Covid wave, 50% of those surveyed plan to travel in April-June | Nagpur News

Dambach, USWNT Travel to Netherlands for Final Match of 2020